Ioannis Capodistrias was born in 1776 in Venetian-held Corfu. He was the sixth child of Count Antonios-Maria Capodistrias and Adamantini Gonemi. He was brought up, along with his eight siblings, in a strict patriarchal and religious family, which was one of the oldest noble families on the island and which, according to tradition, arrived in Corfu at the end of the 14th century from the city of Capo d’Istria, in modern-day Slovenia. The Capodistrias family gained a significant presence in the political, economic, and social affairs of the island. Ioannis’ father, Antonions-Maria Capodistrias (1741-1821), was a reputable lawyer and played an active role in the political life of the area.

Following the basic general education he received in Corfu, Ioannis travelled to Italy, as did many young nobles of the time, and studied medicine in Padua (1794-1797), taking lessons in law and philosophy at the same time. Having finished his studies, he returned to Corfu, where he practised medicine pro bono. His return coincided with the arrival of the Republican French on the island, which brought about radical change. The siege of Corfu in 1799 by the powerful Russo-Turkish forces resulted in the departure of the French. In 1800, the Septinsular Republic was founded: the first neo-Hellenic state body, under the control mostly of the Russians. As Secretary of State for Foreign, Naval, and Trade Affairs for the Septinsular Republic, and as Superintendent of Education, he worked systematically for the application of the constitution, the training of administrative staff, the opening of new schools, and for defence, as, in 1807, he successfully coordinated the defence against the attack on Lefkada by Ali Pasha, when he met the Greek warlords. However, in the same year, the Septinsular Republic was abolished and the Ionian Islands were ceded to the Imperial French by the Treat of Tilsit.

In 1808, Ioannis Capodistrias accepted an invitation from the Russian Ministry of Foreign Affairs to work for the Russian diplomatic corps. He soon distinguished himself and climbed up the hierarchy of the Russian foreign ministry. In 1813, on the orders of Tsar Alexander I, he contributed to the shaping of the Swiss Federation and the drawing up of a new Swiss constitution. The Swiss recognised his great contribution and they made him an honorary citizen. In 1814, he participated in the Congress of Vienna, which aimed to establish a new order in Europe following the defeat of Napoleon. Capodistrias became an equal participant in the discussions along with important figures of diplomacy such as Metternich, Talleyrand, and Castlereagh. In 1815, on behalf of Russia, he undertook the final peace negotiations with the French and co-signed the Treaty of Paris, having made a vital contribution to the creation of an independent state in the Ionian Islands under the protection of the United Kingdom. His experience of diplomatic negotiations influenced his ideas regarding the rights of nations for self-determination. From 1815, as Foreign Minister for the Tsar, he had significant influence on the European stage. In fact, when the Greek Revolution broke out, despite believing it to be untimely, he made a major contribution to its success by ensuring that the Great Powers did not intervene in favour of the Ottoman Empire. However, in 1822, he was compelled to resign from the Russian foreign ministry when it appeared that the Tsar was not inclined to support the revolutionary Greeks against the other European powers. From 1822 to 1827 he lived in Geneva, using his acquaintances and skills in favour of events in Greece and creating a powerful philhellenic network.

The 3rd National Assembly of Troezen (1827) elected Ioannis Capodistrias Governor of Greece, with a seven-year term of office. From this position, he attempted to lay the foundations of the new Greek state on the basis of his values and his experience. Despite the violent end that was brought to his efforts, he left a remarkable achievement behind, and many national institutions have their origins in this productive period. 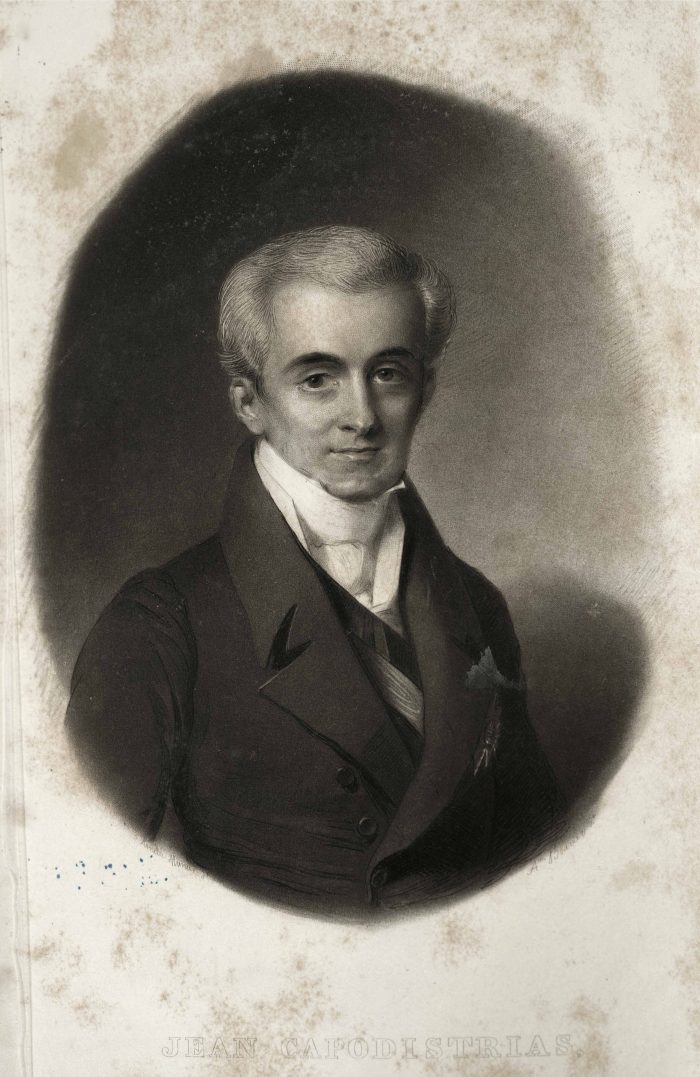 ‘Of course, we must have a homeland, a country, a source of inspiration… For all the respect we enjoy in the world, it is not possible for this to be the result of our actions alone…’

After visiting the courts of Europe in search of support, Capodistrias arrived in devastated Greece in early 1828, determined to organise a state from nothing. From the start, he managed to ensure the cooperation of representatives of all the leading groups. This meant that he achieved the internal peace that would allow the organisation of a basic administration, the state machinery to work with some effectiveness, and care to be taken of orphans and those in general who were defenceless. The country gained security and the groundwork was laid for a smooth transition. The Governor’s priority was to expel the Turks and Egyptians from the Peloponnese and Central Greece and secure, as far as possible, the widest borders for the new state. According to Capodistrias, Greece in 1828 was not yet mature enough for a constitutional system of government. The liberation of the country, international recognition, the establishment of secure borders, and the distribution of land to the landless had precedence. Amongst the priorities of Capodistrian policies was the expansion of basic education through peer-to peer schools and the creation of a central school for the education of future teachers.

In his efforts to create a European state, over time, Capodistrias made many political enemies. These included many factions: the new reality brought to the forefront new political and social forces with conflicting interests. Many of the hopes of the revolutionary Greeks were dashed by the harsh reality of a small, poor country that was forced to take its first steps reliant on aid from European powers. Capodistrias himself adopted a centralised system of government, which upset those who believed in democratic processes. Furthermore, mostly the British, but also the French, felt that Capodistrias served Russian interests and, in any case, did not satisfy their demands. Although the Governor succeeded in achieving Greek independence—with expanded borders—by the treaty of 1831, the bitter reaction against him took form in the Mavromichalis family. On the morning of Sunday, 27th September 1831, in Nafplio, he was murdered at the church of Agios Spyridon by the son and brother of Petrobey Mavromichalis.

A chapter ended for the new Greek state. The Governor’s body would be taken to Corfu in April 1832 by his brother Augostinos to be interred at Platytera Monastery, next to the grave of his father, Antonio-Maria Capodistrias.