1776 Ioannis Capodistrias is born in Corfu 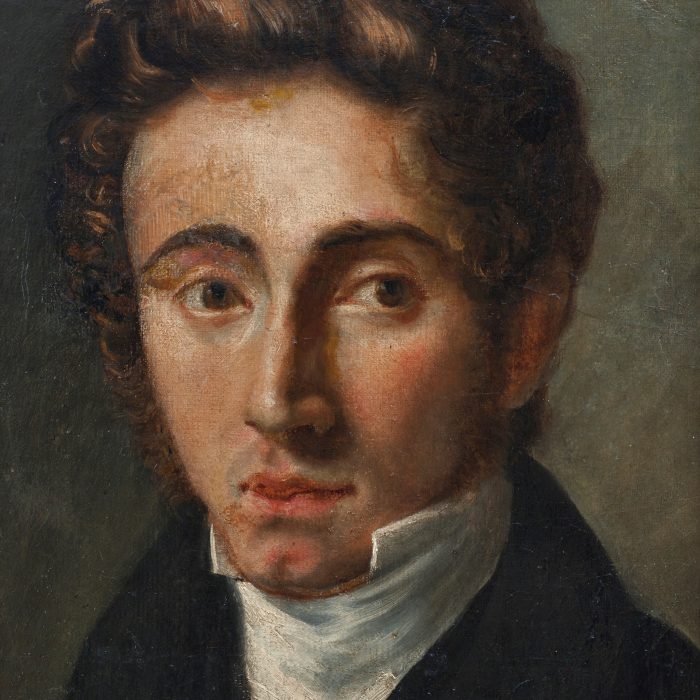 The birth of Ioannis Capodistrias

Born in February 1776, he was the sixth child of Count Antonios-Maria Capodistrias and the noblewoman Diamantina Gonemi. He was raised in an aristocratic and religious environment, which, to a great extent, formed his values and beliefs.

Ioannis Capodistrias held his father—a successful lawyer and politician of the time—in great esteem. Two of his siblings also followed and had notable political careers: his youngest brother, Augustinos (1778-1847), was co-governor and took over as governor of Greece from 1831 to 1832, following Ioannis’ death; and Viaros (1774-1842) was a notable politician and lawyer and was a member of the Society of Friends in Corfu.

1792 I. Capodistrias nearly loses his life falling off a horse 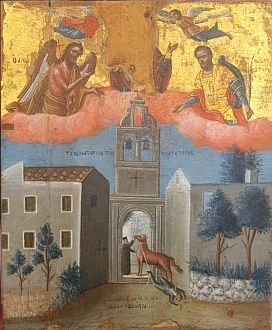 While he was living in Corfu, Ioannis Capodistrias had a serious accident in the area of Platytera Monastery, when he fell from his horse, which bolted, dragging along the incapacitated Ioannis.

He was saved by the timely intervention of the monastery priest, who also tended to him. Ioannis Capodistrias’ survival was considered a miracle performed by Saints Timotheos and Maura, as is depicted in the icon. Following the incident, and for the rest of his life, he maintained a special relationship with Platytera Monastery.

* The icon with the depiction belongs to Patytera Monastery, Corfu Metropolis. 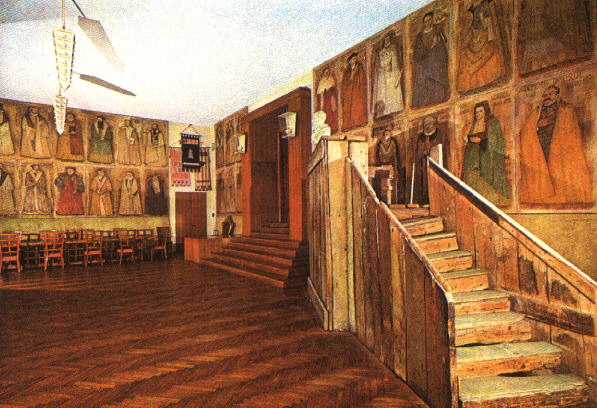 Shortly before the end of the 18th century, the young Ioannis Capodistrias went to study medicine at the University of Padua. Having finished his studies, he returned to his birthplace, Corfu, where he worked as a doctor-surgeon until politics won him over. Today, he is included among the forty most distinguished graduates of the University of Padua, together with personalities such as Galileo and Copernicus.

* View of the Sala dei Quaranta of the University of Padua, where the portraits of the forty most distinguished graduates are on display, among which is that of Ioannis Capodistrias.

1798 Capodistrias’ father arrested and imprisoned by the French. The family moves to Koukouritsa 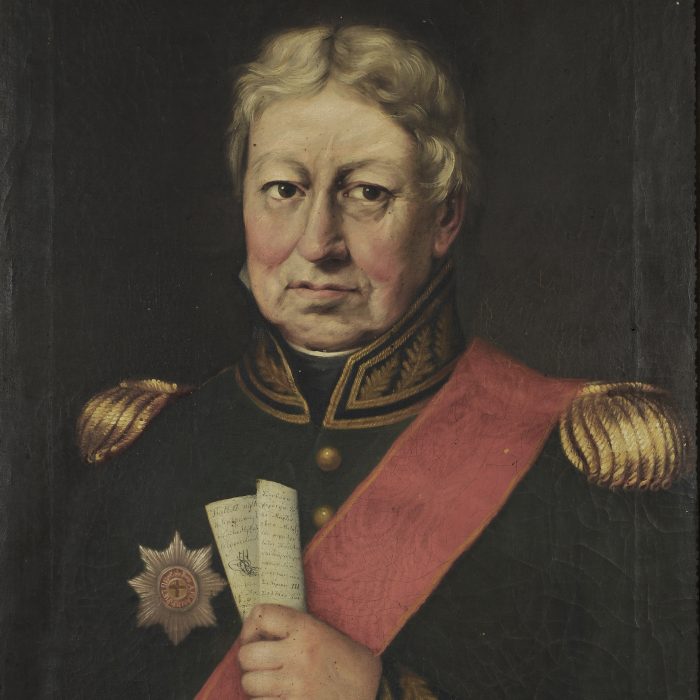 The arrest of Antonios-Maria Capodistrias 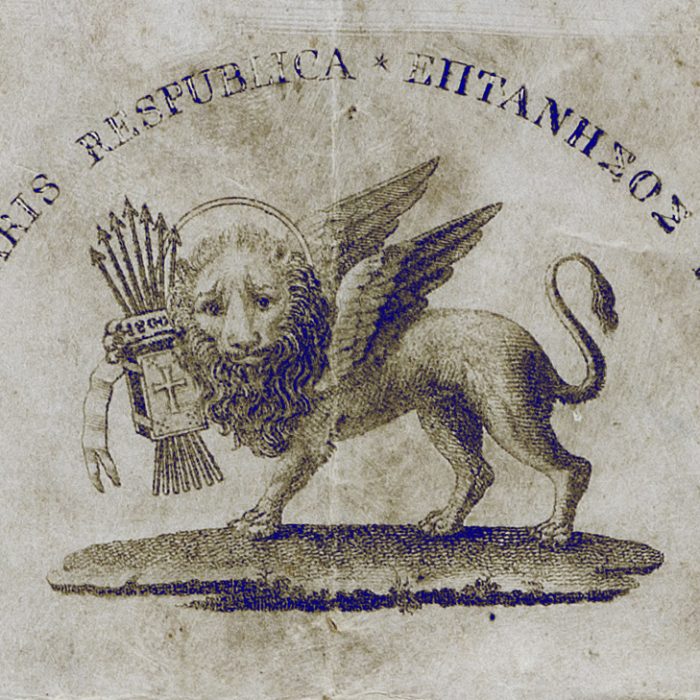 The participation of the Capodistriases in the Septinsular Republic

Ioannis’ father, Antonios-Maria, serves as the representative of the Ionian Islands in the negotiations between Russia and the Sublime Porte, which took place in Constantinople, regarding the founding of the constitutional Septinsular Republic (1800-1807).

Ioannis Capodistrias’ political career begins with his participation in the administration of the Septinsular Republic, where, until its abolition in 1807, he advanced steadily.

Indicative positions he held in the government:

In 1801, he successfully implemented the constitution and brought order to Kefalonia.

In 1803, the senate appointed him  Secretary of State (the equivalent of the modern office of minister), for Foreign, Interior, Naval, and Trade Affairs of the Septinsular Republic.

In 1807, he was appointed temporary commissioner in Agia Maura (Lefkada) together with Metropolitan Ignatios. It was there that he first met Theodoros Kolokotronis, Markos Botsaris and other warlords from the Peloponnese and Central Greece.

On 15th March 1804, he was awarded the rank of collegiate councillor by Tsar Alexander I, who, in 1807, when the Russians withdrew from Corfu, suggested that Ioannis Capodistrias should accompany him. He chose to remain on the island until August 1808.

* The portrait depicts the tsar of Russia, Alexander I. A work by George Dawe (1781-1829) from the collection of the Hermitage Museum,  St Petersburg, Russia

In 1808, Ioannis Capodistrias relocates to St Petersburg at the invitation of the Russian foreign minister Count Rumyantsev, having already been awarded the medal of Knight of the Order of St Anne by Tsar Alexander.

There would follow various postings in the Russian diplomatic service, peaking in 1816 with his appointment as Russian foreign minister next to K.V. Nesselrode. In 1822, he retired from the diplomatic service due to a disagreement with Tsar Alexander over the Greek question and settled in Switzerland.

His formal departure took place in 1827.

1814 I. Capodistrias is sent to Zurich to resolve the Swiss question. There, he meets J.G. Eynard. 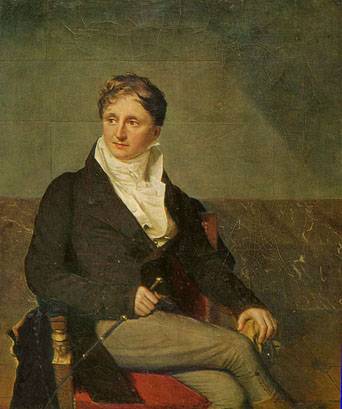 His contribution in Switzerland

His presence proved decisive in Switzerland gaining independence from Napoleonic France, as he made a vital contribution to the forming of the Swiss Federation and its neutrality.

He played an important role in the drawing up of the new Swiss Constitution and, many years later, for the whole of his contribution, he was awarded honorary citizenship by one canton (Vaud) and two cities (Lausanne and Geneva).

1815 The Philomuse Society is founded in Vienna 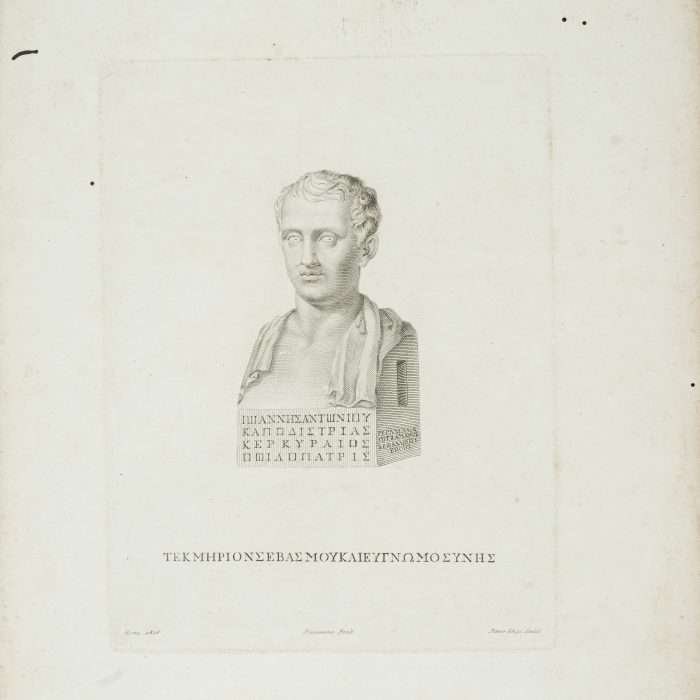 The Philomuse Society is founded in Vienna

As a close advisor of Alexander I, Ioannis Capodistrias participated in a diplomatic mission to Russia for the Congress of Vienna, which redrew the borders of European states. At the same time, he signed the Treaty of Paris for Russia, by which the Ionian Islands became an autonomous state under the protection of the British Empire.

*Copper engraving of the bust of Ioannis Capodistrias by Gerasimos Pitzamanos. A copy of the engraving today belongs to the collection of the Capodistrias Museum.

1816 Capodistrias becomes foreign minister of Russia, a position he shares with K.V. Nesselrode 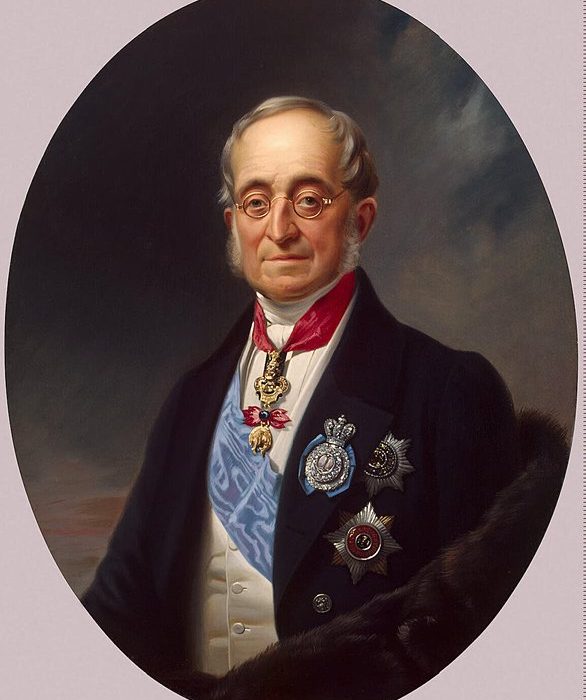 1817 Ioannis Capodistrias and Alexandru Sturdza co-author an apology of the Holy Alliance on behalf of Tsar Alexander I. 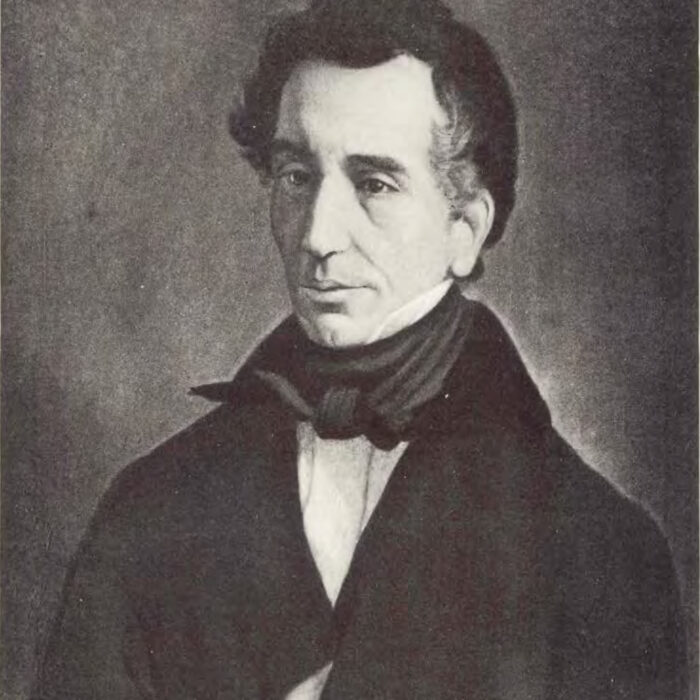 The Sturdza family met Ioannis Kapodistrias in 1809, when he arrived in St Petersburg. The brother of Ioannis’ close friend Roxandra, he became his confidant and followed when he left Russia, remaining with him until the end. This close collaborator and friend of Ioannis Capodistrias was also the Governor’s first biographer.

1821 I. Capodistrias participates in the Congress of Laibach as a member of the Russian delegation 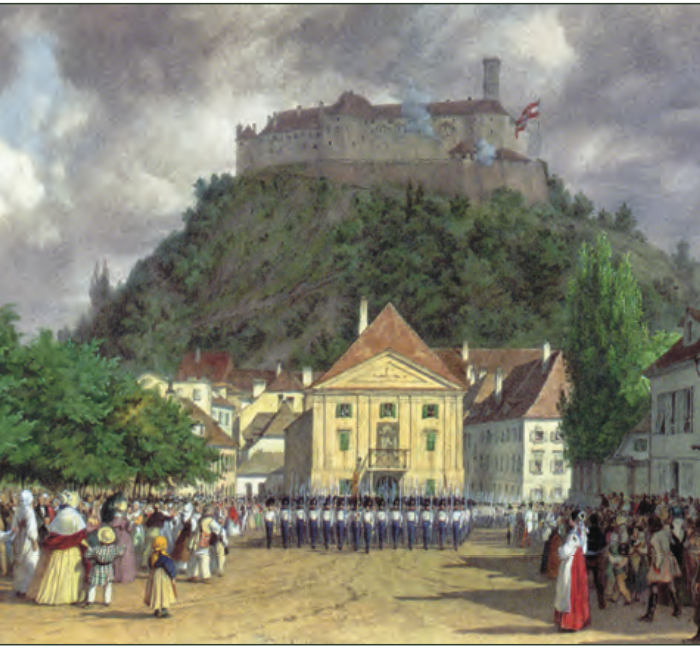 The Congress of Laibach

The Congress of Laibach was attended by the leaders of the member states of the Holy Alliance, as well as England, which participated as an observer. The purpose was to solve the problems that had arisen in Europe following the Napoleonic Wars and to preserve the peace.

1822 I. Capodistrias takes leave from the Russian diplomatic service after failing to change the tsar’s policy towards Greece. He relocates to Geneva until 1827. 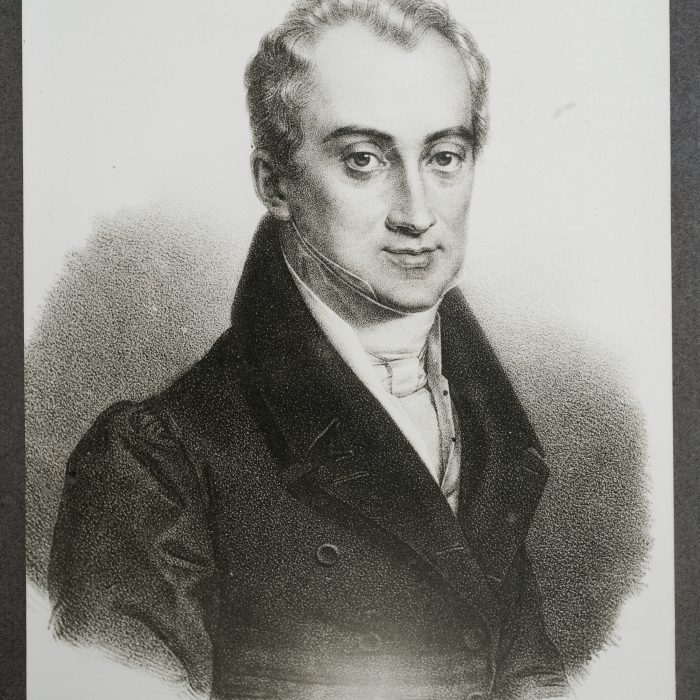 Ioannis Capodistrias retires from Russian diplomacy after the refusal of Tsar Alexander to support the Greek Revolution of 1821. He settles in Geneva, Switzerland, where he has already been made an honorary citizen. He will remain in Switzerland until 1827, from where he will be highly active in encouraging philhellenism in Europe and economic support for the Greek struggle for independence.

1827 I. Capodistrias is elected Governor of Greece on 30th March by the 3rd National Assembly

The National Assembly of Troezen

The revolutionary Greeks meet at Troezen in the spring of 1827 and unanimously elect Ioannis Capodistrias the first Governor of the newly constituted Greek state, with a term of seven years.

1828 Ioannis Capodistrias disembarks in Aegina. The phoenix, the first currency of the modern Greek state comes into circulation. 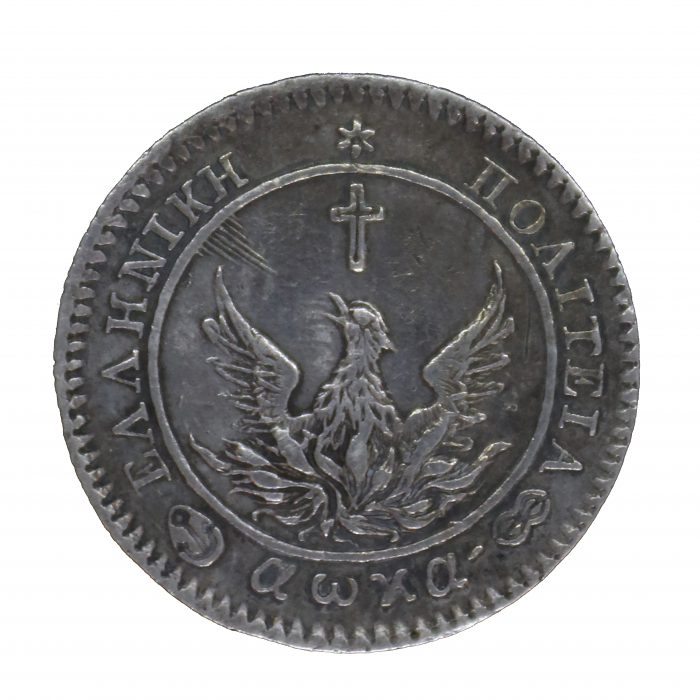 The circulation of the phoenix

The phoenix was set at a value equal to 1/6 of the metal value of the Spanish pillar dollar, which was in broad use in the Greek region. This decree placed four denominations into circulation: the silver phoenix and the copper lepto with multiples of five lepta and ten lepta. In 1830, the twenty lepta coin also went into circulation.

The National Mint, which produced the coin, was founded in Aegina, and most likely operated from the ground floor of the Governor’s Residence. The decoration of the obverse of all coins from the Capodistrian period depicts in its centre the mythical phoenix being reborn from the flames, with its wings open and crowned with a cross and rays of light.

Obverse: reborn phoenix, above its head a cross and to the left rays of sunlight. Around the edge the epigraph: ‘ΕΛΛΗΝΙΚΗ ΠΟΛΙΤΕΙΑ’ [Greek State], and at the bottom is written the year of the declaration of the Struggle for Independence (1821) in Greek letters ‘αωκα’.
Reverse: the value of the coin ‘1 ΦΟΙΝΙΞ’ [1 phoenix] surrounded by branches of olive and laurel that are united at the bottom with a bow. Around the edge there is the epigraph: ‘ΚΥΒΕΡΝΗΤΗΣ Ι. Α. ΚΑΠΟΔΙΣΤΡΙΑΣ’ [Governor I.A. Capodistrias] and the date of issue.

1829 I. Capodistrias opens the orphanage in Aegina to house war orphans 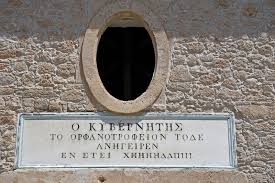 Opening of the first orphanage in Greece

Governor Ioannis Capodistrias founds the first orphanage in Greece in Aegina, which houses the orphans of the struggle for independence of the Greeks.

1830 The Protocol of Independence: the first diplomatic act to recognise the independence of Greece 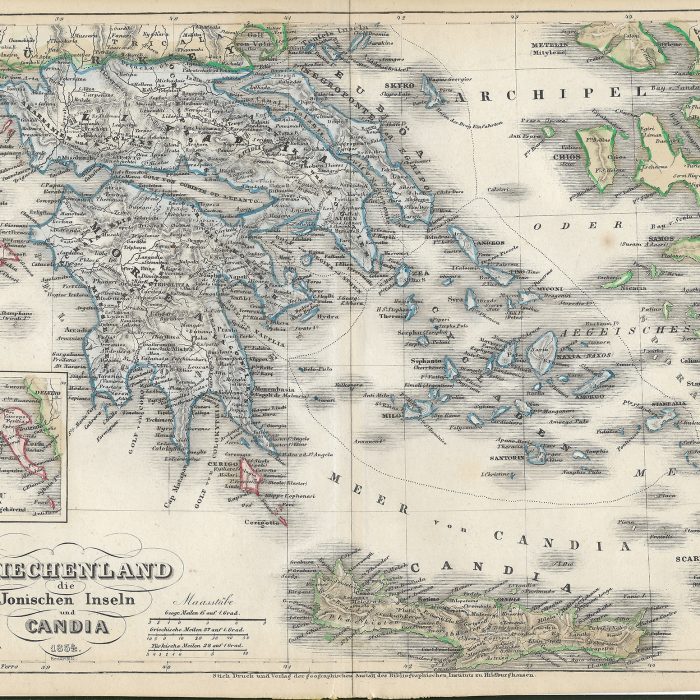 The Protocol of the Independence of Greece was signed on 3rd February 1830 by the United Kingdom, Russia, and France recognising the newly formed Greek state and defining its borders and system of government.

* Map of Greece from 1854. The Spyros Gaoutsis Collection

1831 I. Capodistrias is murdered in Nafplio 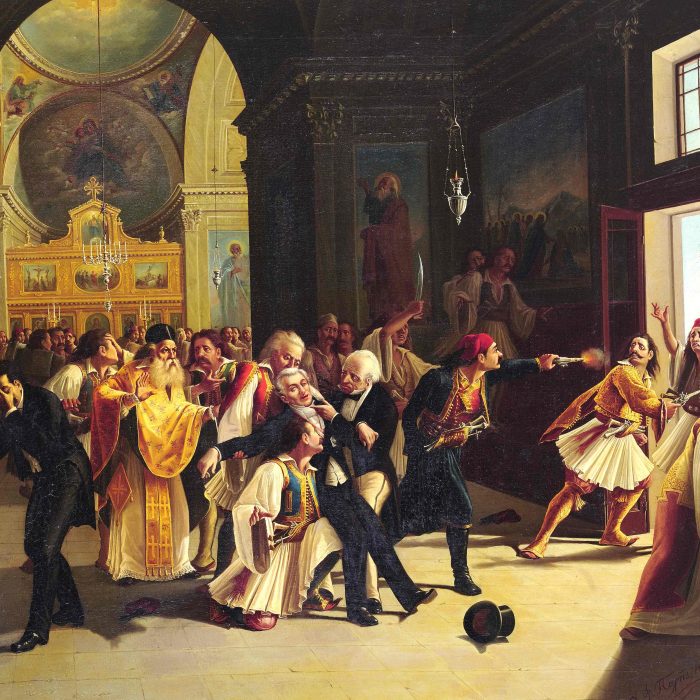 The assassination of Ioannis Capodistrias

On 27th September 1831, Ioannis Capodistrias was attacked with a pistol and a knife by Georgios and Konstantinos Mavromichalis as he was entering the church of Agios Spyridon. The Governor was fatally wounded in the attack and succumbed to his wounds a few hours later.

The cause of the attack was Ioannis Capodistrias’ decision to arrest and jail Petrobey Mavromichalis, the father of Georgios and brother of Konstantinos. Konstantinos Mavromichalis was killed on the spot by the enraged crowd, while Georgios, who initially sought the protection of the French embassy, was eventually arrested and condemned to death.

Ioannis Capodistrias was succeeded as governor of Greece by his brother Augustinos.

* A work by Charalmbos Pachis on the theme of the Assassination of Ioannis Capodistrias (1872). Donated to the Capodistrias Museum by Konstantinos and  Erasmia Panteliou.

1832 Fall of Augustinos Capodistrias, president of the temporary Administrative Committee, who undertook the governance of Greece following the murder of Ioannis, and his return to Corfu with the body of the Governor. 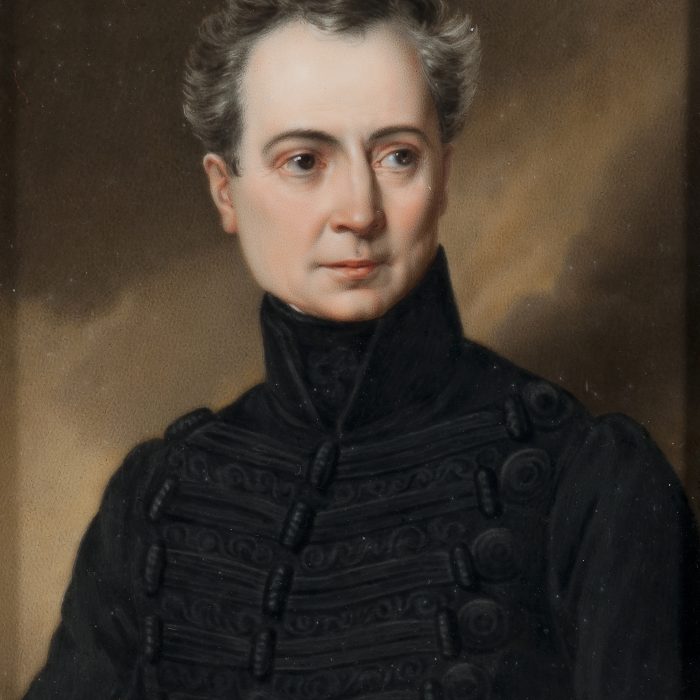 Augustinos (1778-1857) was two years younger than his brother Ioannis. He was invited to participate in the government of the Greek state by Ioannis Capodistrias, where he undertook the political and military administration of West Greece. Following the death of his brother, the Senate appointed him to serve as governor of the Greek state for a short time, with co-governors Theodoros Kolokotronis and Ioannis Kolettis.

Following his resignation, he returned to Corfu taking with him his brother’s body and possessions. He died in 1857 while in St Petersburg. He was interred at Platytera Monastery, next to his father and brother.