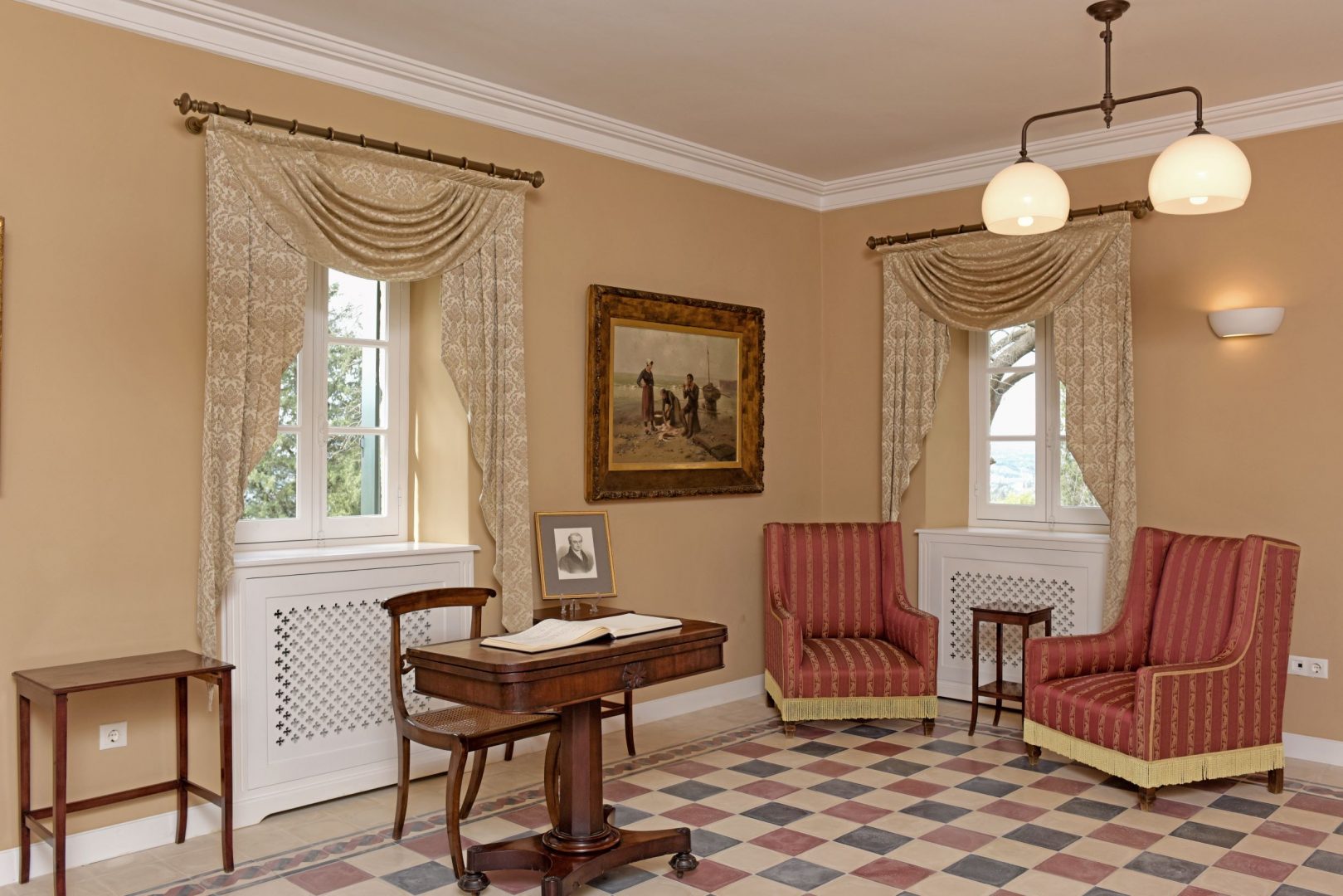 The Capodistrias Museum – Center for Capodistrian Studies is the first and only museum in Greece devoted solely to the life and legacy of Ioannis Capodistrias, and has been open since 1981. It aims to take visitors on a journey through the history of Corfu, Europe and modern Greece, following the events of the life of the first governor of the Greek state.

The old country residence that houses the museum belonged to the Capodistrias family at least from the 18th century until a few decades ago. In 1979, in a move that greatly benefitted the area, Maria Capodistria donated it to three historically significant Corfiot cultural organisations, the Corfu Reading Society (founded 1836), the Philharmonic Society of Corfu (founded 1840), and the Society for Corfiot studies (founded 1952).

Maria Capodistria-Desylla was a significant figure in Corfu. Born in Athens in 1898, she settled permanently in Corfu in 1928, together with her daughters from her first marriage to Loudovikos Skarpas, Eleni and Dareia. In 1931, she married she married the successful Corfiot industrialist Stamatios Desylla. She became involved in a variety of activities, making an especially valuable contribution to the Red Cross. Following the sudden death of husband at Christmas in 1956, while he was still in office of as mayor of Corfu, she was elected mayor of the city of Corfu, becoming the first elected female mayor in Greece.

The museum was founded in 1981 and, for many years, due to a lack of funds and specialist staff, its activities were quite limited. In 1998, with funding from the then Prefecture of Corfu, and with the participation of the then mayor Andreas Pangratis, three rooms were renovated and the collection was put back on display. For the traditional Ionian Island architecture of the building, the garden, and the characteristic design of the surrounding areas, the Ministry of Culture declared it a protected historical monument in 1995.

From 2007, the significant annual donation by the grand benefactor of the museum, the Corfiot businessman and Swiss resident Christos Fokas, allowed the museum to develop its activities, leading to a constant increase in the number of visits, and, every summer it hosted notable events in the garden.

In 2012, the museum closed temporarily for renovations. Its inclusion in the LEADER programme–under the supervision of the Development Company of the Prefecture of the Ionian Islands and the Ministry of Rural Development–allowed the museum to modernise and redesign the permanent exhibition and the surrounding grounds. At the same time as the renovation, the museum went ahead with important work for the development of its research and educational roles, as well as networking with other museums and cultural and intellectual bodies/archives connected with the life and legacy of Ioannis Capodistrias. It created a specialist research team, headed by the emeritus professor of the University of Crete, Christos Loukos, which designed a digital platform to interconnect sources from archives and libraries in Europe. The digital archive can be accessed worldwide via the museum’s new website. The Ioannis Capodistrias Digital Archive and the museum’s webpage were created with funding from the John S. Latsis Public Benefit Foundation and went online in 2016.

In October 2017, the renovated Capodistrias Museum-Center for Capodistrian Studies was opened by the president of the republic, Prokopis Pavlopoulos, who stated in his speech that, ‘This is the most important moment‘ of his political career.

The modernised Capodistrias Museum – Center for Capodistrian Studies is now recognised as a modern museum and important location in Corfu, providing a high level of services, each of which helps to fulfil its aims, which are the preservation, study and presentation of the legacy of the Governor, both for the specialist, as well as for the wider and international public. 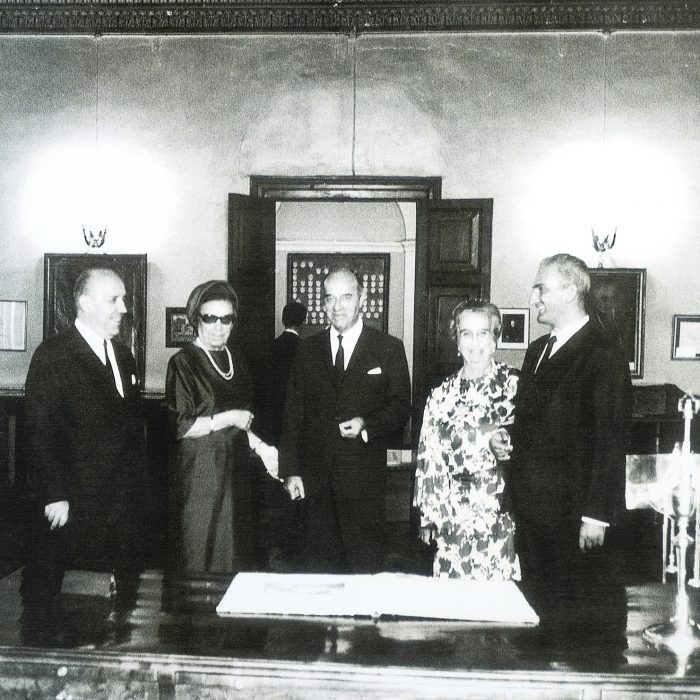 Maria Capodistria-Desylla donates the estate for the creation of the Capodistrias Museum-Centre of Kapodistrian Studies.

In 1978, Maria Capodistria-Desylla decided to convert Koukouritsa into public property with the aim of establishing there a museum about Ioannis Capodistrias.

The following year, she donates Koukouritsa, together with personal items that belonged to Ioannis Capodistrias and family heirlooms, to three historically significant Corfiot cultural institutions: the Corfu Reading Society (founded 1836), the Philharmonic Society of Corfu (founded 1840), and the Society for Corfiot Studies (founded 1952), to jointly found and manage the Capodistrias Museum, as well as potentially house a Centre for Capodistrian Studies.

The founding of the Capodistrias Museum – Center of Capodistrian Studies

The Capodistrias Museum – Center of Capodistrian Studies was founded in 1981, one year after the death of Maria Capodistria-Desylla. The original exhibition in the house-museum was limited to two rooms.

The three co-owners of the museum – the Reading Society of Corfu, the Philharmonic Society of Corfu and the Society for Corfiot Studies – face serious difficulties maintaining the museum due to lack of funds, and they unsuccessfully appeal to various public and private bodies for financial support.

1995 In 1995, Koukouritsa is declared a historic national monument by decree of the Hellenic Ministry of Culture

In 1995, the Ministry of Culture declares the museum as a historical monument (OGG 893/B/30-10-1995) noting that, ‘…the complex forms an exceptionally graceful whole: the clear morphology of an Ionian aristocratic country residence together with its surroundings and their modifications (pergolas, steps, pavilions, cobbled roads, etc.) create a perfectly harmonious composition of natural and manmade beauty’. 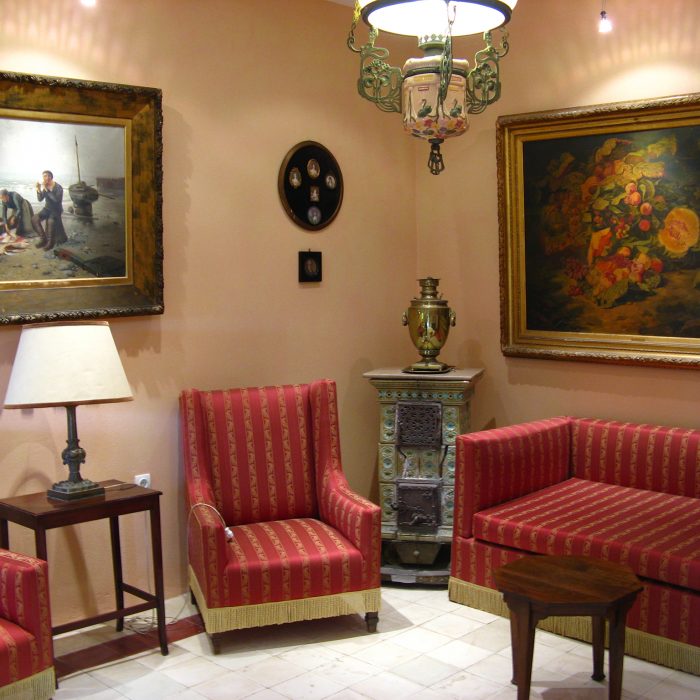 Partial renovation and re-design of the museum exhibition

Following the many efforts of the then Board of Directors of the museum, some funding was secured from the Hellenic Ministry of Culture and the then Prefecture of Corfu (under Andreas Pangratis), which resulted in three rooms being renovated between 2000-2003 and the museum’s exhibition being redesigned in order to recreate the ambience of a 19th-century Corfiot residence.

2007 The Corfiot businessman and resident of Switzerland, Mr Christos Fokas, becomes the grand benefactor of the museum, providing an annual sponsorship 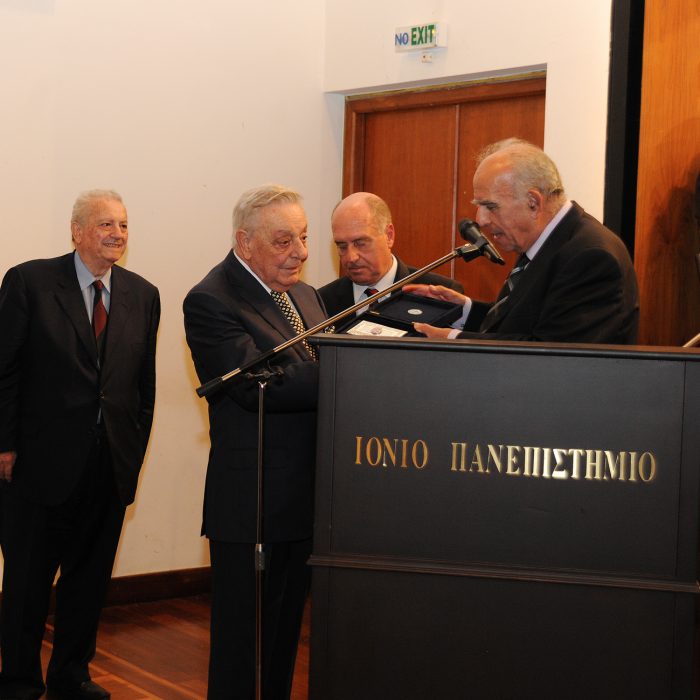 Since 2007, the museum has been able to operate without interruption thanks to the significant annual sponsorship received from its grand benefactor,  Mr Christos Fokas, Corfiot businessman and permanent resident of Switzerland.

As a result of his sponsorship, it was possible for the museum to be successfully submitted to the LEADER programme and to be radically renovated.

2011 30 years anniversary of the Capodistrias Museum 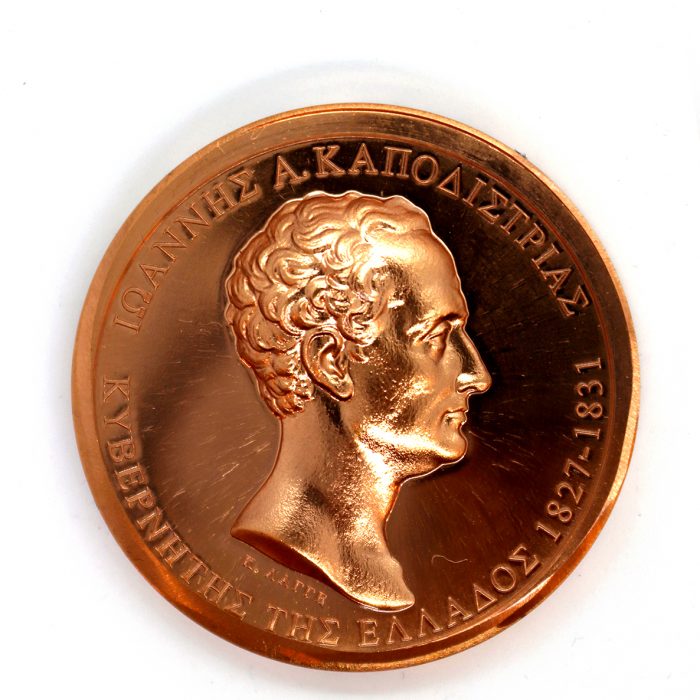 Issuing of a commemorative medal for the 180th anniversary of the death of I. Capodistrias

To mark the 180 years from the Governor’s assassination and the 30 years from the museum founding, in September 2011, the National Mint issued 500 copies of a bronze commemorative medal with the bustof I.A. Capodistrias,  accompanied by a numbered certificate of authenticity.

The obverse depicts I. A. Capodistrias, copy of the medal created by the Bavarian engraver Konrad Lange (1806-1856) as part of a series presenting distinguished figures from the Greek Revolution. The reverse depicts the Capodistrias family’s coat of arms, which is also used as the emblem of the museum.

On the 23rd September 2011, an important event was organised at the Reading Society, with the participation of the Swiss Ambassador Lorenzo Amberg and the Ambassador-Counsellor of the Russian Federation Evgeny Yukov, on the contribution of I. A. Capodistrias to the European countries where his ideas left an indelible mark.

Inclusion in the LEADER investment programme and comprehensive renovation

Following the submission of a required plan, the Capodistrias Museum was successfully included in the local programme investment plan of Axis 4 of the 2007-2013 RDP, LEADER approach, under the supervision of the Development Enterprise of the Ionian Island Region and the Ministry of Agricultural development.

The plan, with a total budget of €193,000, provides for the modernisation and remodelling of the Capodistrias Museum and its surrounding area: ‘…a small-scale regional museum in the interior of Corfu is being converted into a model cultural unit, in accordance with the latest developments in museum design, with possibilities for autonomous operation and visitor service to national and European standards, so that it can function as an important attraction for cultural tourism’. 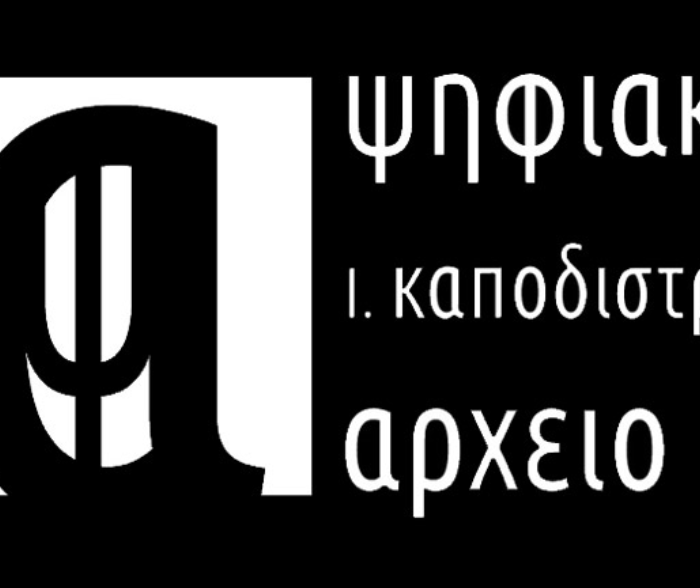 With funding from John S. Latsis Public Benefit Foundation of €40,000, a academic research team, presided over by Professor Ch. Loukos, emeritus professor at the University of Crete, was formed in order to create a digital archive/website for Ioannis A. Capodistrias.

Among other things, this archive includes a guide to the basic archival collections relating to the activities of I. A. Capodistrias at a European level,  digitised material from the Corfu General State Archives, as well as a digital catalogue of a variety of documentation related to I. A. Capodistrias, which includes photographs and corresponding historical commentary.

Thus, with the application of new technologies, the Museum managed to fulfil it donor’s, Maria Capodistria-Desylla, wish: ‘…to house in the future the Governor’s archives and whatever else is related to his activities in Greece and Europe, so that the visitor can gain a clear idea of the contributions made by Capodistrias as a diplomat and as governor of Greece. 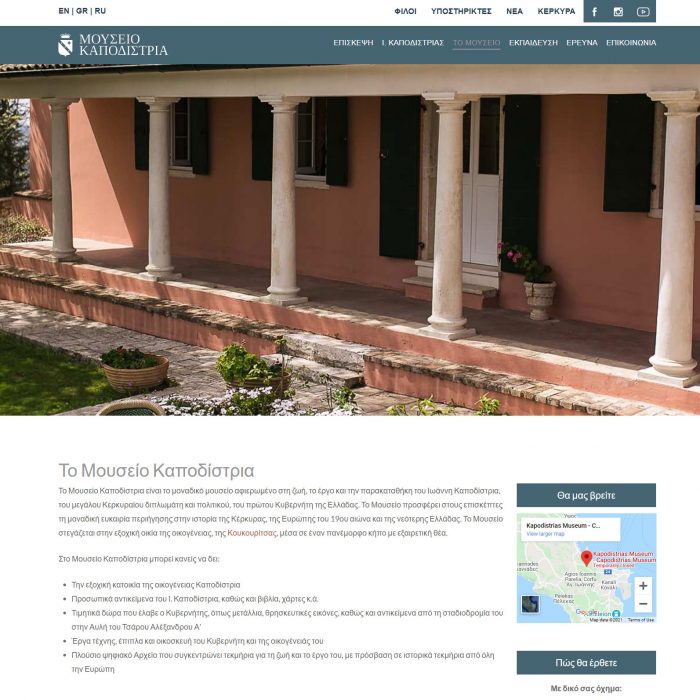 The museum creates a trilingual website with a plenty of resources for its own history and that of I. Capodistrias.

The website was created with funding from the John S. Latsis Public Benefit Foundation as part of the 2016 Support for Scientific Societies programme.

2017 Opening of the renovated Capodistrias Museum 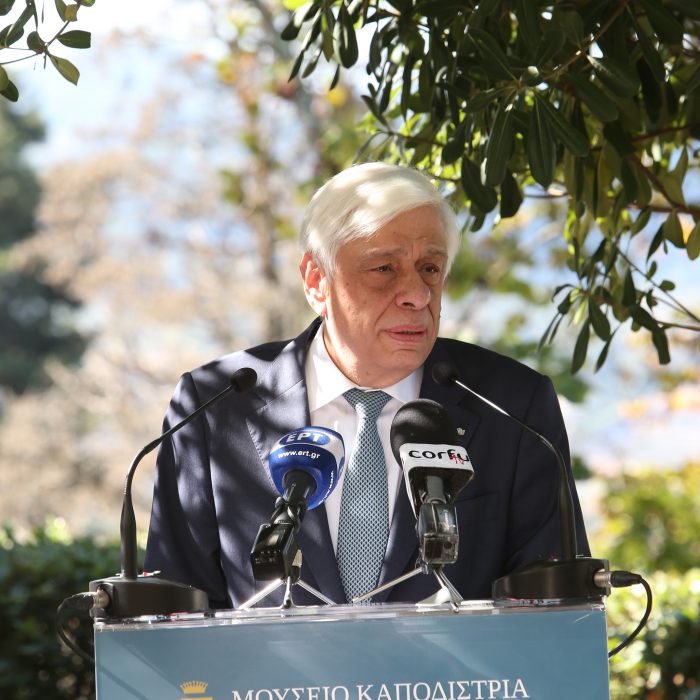 Opening of the renewed museum

The renovated Capodistrias Museum opened on 15th October 2017 with up to date facilities and new opportunities for the public. The official opening ceremony was lead by His Excellency the President of the Greek Republic, Mr Prokopis Pavlopoulos, who stated in his address that, ‘This is the most important moment of my political career’.

The museum is now one of the most important cultural organisations in the country. It has managed to create a secure framework for learning, research, and entertainment, and it gives equal to a variety of social audiences. To achieve its mission, the museum offers a range of facilities, activities and a diverse programm, as well as it develops strategic partnerships. Its community, friends of the museum, companies and organisations help the museum through sponsorship and the donation, so that the Museum may sustain its services to the public without interrupt. The Museum aims to continually guard and encourage the conservation of the heritage and history of I. Capodistrias and of the period in which he lived.

* The opening ceremony of the Capodistrias Museum lead by the president of the Republic, Prokopis Pavlopoulos.