Dionysios Romas, of the great aristocratic family in Zakynthos, was a lawyer and diplomat. He served as Consul of Venice to Morea and Roumeli, senator in the Ionian Islands and state counsellor in the newly formed Greek state. He was born in Zakynthos in 1771. His father was Georgios Kandianos Romas (1725-1792), an officer in the Venetian army and General Consul of Venice to Morea and Roumeli. His mother was Diamantina Kapnisi, from a noble family.

He began his education in his homeland of Zakynthos and then left, as did many Ionian Islanders, to study law at the University of Padua. After completing his studies, he returned to Zakynthos and soon took over from his father as General Consul of Venice to Morea and Roumeli. This was how he met personalities from the Struggle (Notaras, the Mavromichalises, Londos, Kanellos Deligiannis, Theodoros Kolokotronis, Zaimis, etc.). He was active in the political life of the country and stood out for his liberal ideas. In 1803, he was elected as a member of the Constitutional Committee for the vote on the Ionian constitution (Septinsular Republic), and in 1806 he was appointed Rector of Corfu. Later, in 1809, he was elected senator (President of the Council of Justice).

He would live in Corfu until 1815, before being forced to return to Zakynthos due to his disagreement with the high commissioner of the Ionian Islands, Thomas Maitland. There, he would set up the ‘Reborn Phoenix’ masonic lodge. His home would serve as a centre for the Society of Friends and provide sanctuary for revolutionaries. Dionysios Romas participated in the liberation of Greece: he provided a large part of his fortune to support the revolutionaries and managed the money from Swizz, German, and French philhellenes and contributions from the Ionian Islands.

He was of significant help through his participation in the Zakynthos Committee, which supported the Greek Revolution by sending armaments and food to Navarino and Mesolonghi, chartering boats from ship owners for frequent missions, and intervening to quell conflicts between warlords. He also managed to organise bands of volunteer fighters. As a result of his actions, he was proposed for the position of Governor of Greece at the 3rd National Assembly of Troezen. However, he declined, as he fervently supported the election of Ioannis Capodistrias, believing him to be the most suitable person to undertake the organisation of the newly formed Greek state.

In 1833, Dionysios Romas was in Nafplio for the arrival of King Otto of Bavaria. Shortly after, he was accused, together with Theodoros Kolokotronis and Dimitrakis Plapoutas, of conspiracy against the king. Ultimately, he was found innocent, and Otto honoured him with the medal of Commander of the Order of the Redeemer and appointed him state counsellor. He remained an active philanthropist until the end of his life. He died in the summer of 1857 on Zakynthos. 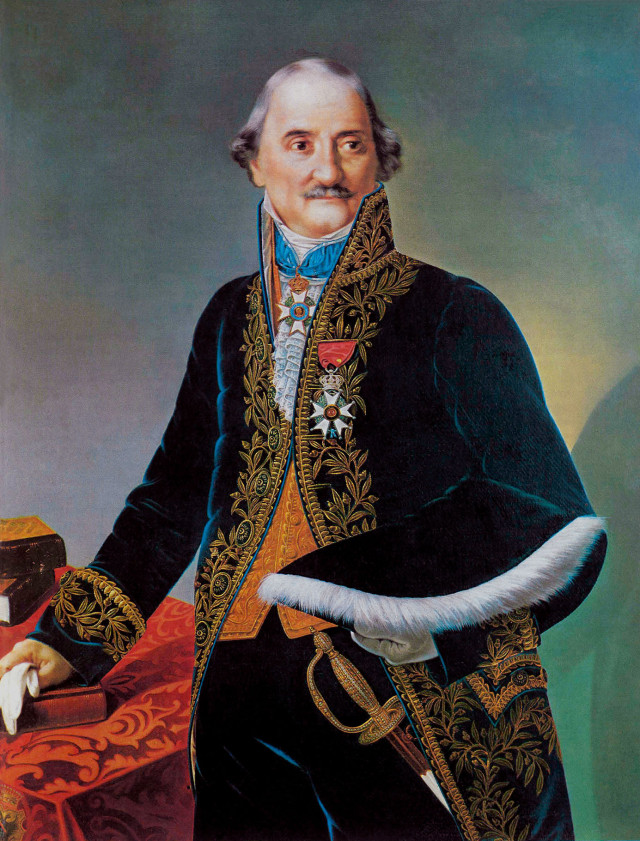 ‘For the good of my homeland, I would willingly renounce even my own family, and thus should feel every good patriot…’

Masonry and the Greek Revolution

During the 18th century, progressive fraternities, who represented the ideas of Freemasonary, made their presence felt in Europe and America. Secret societies, such as the Jacobites in Britain and the Carbonari in Italy, operated as transmission centres for liberal political ideals. In the 19th century, the dynamism of national liberation movements led to these societies multiplying. Many of these were organised around the Greek Question: Ellinoglosso Xenodocheio [lit. Greek-speaking Hotel] (1811, Paris); Phoenix (1812, Moscow); Athina and the Philathenaic Academy (1813, Athens); the Philomuse Society (1813, Athens); Friends of the Muses Society (1814, Venice); all of which promoted the idea of democracy and cultivated pro-Hellenic sentiment.

The Bienfaisance à l’Orient had begun operation in 1782 and, a short while later, was followed by Philogenie. In 1811, Dionysios Romas united these two fraternities and, in 1815, set up one more in Zakynthos called Anagennitheis Phoinix [Reborn Phoenix]. Following his initiation into the Society of Friends (1819), he utilised his existing communication network to reinforce the Friends and, by extension, the needs of the Struggle. Many members of the Society of Friends were firstly members of Masonic lodges. Besides, the structure of the Society itself followed the prototype of Freemasonary fraternities. The trust, secrecy and reliability that characterised the relationship between Friends helped in his aims. At the same time, the progressive ideas of the members, in combination with their social awareness, was expressed through their philanthropic activities, their support of education and other actions of social solidarity.

In a letter, Ioannis-Baptistis Theotokos asks Dionysios Romas for his support in the creation of a fraternity in Nafplio, which would undertake, inter alia, to care for refugees from Messolonghi and Greek orphans and spread patriotism.

‘I asked of you, via Archimandrite Zensos, to send me anything that is required to enlighten us, that is, on how to open a Masonic lodge: the only way in which we may enthuse and attract these patriots to the holy purpose of defending the rights of our homeland etc. Any other system would be dangerous and would create disagreement amongst us…’