Stamatis Voulgaris was born in Lefkimi, Corfu, in 1777. He developed a love of travel from a young age: ‘I was born with a love of travel: when I was a child, I spent the little money my parents gave me to see through the magic iconoscope cities from other countries […] Later, the great French Revoluion took me further away, and the knowledge of new countries further strengthened this intense desire of mine’.

The arrival of the Republican French in the Ionian Islands in 1797 captivated the young Corfiot. He was in favour of Napoleon’s liberal, progressive policies and, together with many Corfiots, embraced the French as liberators from the bonds of the old regime. He joined the French army in Corfu and went with it when Russo-Turkish forces occupied the city of Corfu in 1799. In the summer of 1800, after being injured during the bombing of Brindisi, he was demobilised for a while and settled in Paris.

In France, which would become his second homeland, he was introduced to art, studying beside the charismatic neo-classical artist, philhellene, Jacobite and official artist to Napoleon Jacque-Louis David (1748-1825). With the support of the French general  Joseph Sécret Pascal-Vallongue—whom he had met during the defence of Lefkada from the Russo-Turks in 1798—he managed to enter the army’s Historical and Geographical Service, from which he graduated in 1808 as a cadet engineer-geographer. One of his first missions was the mapping of the French city of Fontainebleau and its beautiful forest.

In 1809, he was seconded to the staff of the French general Donzelot, commander of Corfu, which, as with the other Ionian Islands, had come back into French hands following the Treaty of Tilsit in 1807. In transit to Corfu from Italy, he was imprisoned by the British and remained a prisoner in Malta until February 1810, when, thanks to an exchange of prisoners, he could finally reach his destination safely. He would remain in the Ionian Island as adjutant to Donzelot, serving a geometer and interpreter, until 1814, when the Ionian Islands came under the authority of the British throne. He returned to Paris, where the restoration of the Bourbons (1815) resulted in him being dismissed from the army, as were all Napoleon’s officers, with the charge of treason. Despite this, Voulgaris remained in the French capital, taking lessons in art from Antoine-Jean Gros, and, in January 1817, he was given French citizenship.

When the Greek Revolution broke out, Voulgaris was in France, with his homeland, Corfu, constantly in his thoughts. In 1823, he participated in the Spanish Campaign, and, in 1825, he left for the Antilles as part of a mission to inspect the islands. During his stay in the Caribbean, he was updated on developments in the Mediterranean and was concerned about how the Greek Struggle would end. As a sign of his fervent support for the liberation of his compatriots, he composed the essay A Grateful Greek to the Spirit of Lord Byron.

He would serve the aim of Greek independence a few years later, when he accompanied Ioannis Capodistrias on his most important journey, headed for liberated Greece. Together with another three French army officers, he agreed to work as a town planner, dealing with the many urgent needs in the areas of housing and the infrastructure required by most cities in the new state. In August 1830, He returned to France suffering from a respiratory illness. For his military service, he was awarded the Cross of the Order of Saint Louis and the title Knight of the Legion of Honour. He spent the last years of his life in his homeland of Corfu, as a private citizen, in the countryside of Potamos. 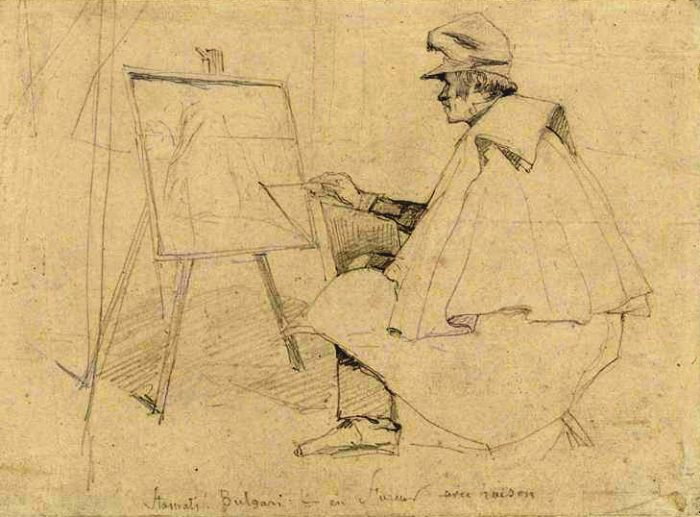 ‘I listened with endless joy to the stories of my compatriots that had travelled as far as Venice!’

Planning the growth of Nafplio

Projects worked on by Voulgaris were the urban planning of Tripoli, the lower town of Patras, and the current historical centre of Nafplio and the improvement of the upper town of Patra. He was also responsible for moving refugees from their ‘disgusting huts’ in Nafplio to the Pronoia suburb.

Stamtis Voulgaris wrote: ‘[In May of 1828] I was engaged in the construction of huts outside the city of Nafplio, in which we would house the unfortunate families who were crowded into disgusting shacks located in the now most unhealthy part of the city. The regular nature of the roads of the square and the buildings in this neighbourhood, which I named Pronoia (), and the improvement works carried out in Nafplio would be used as prototypes in the cities that were built later.

The plague that was ravaging the country at that time and which had reached the outskirts of Nafplio caused the destruction of the new neighbourhood. I then undertook to draw up a plan to extend the suburb which today bears this name. I should not hide the fact that, at that time, the Governor, thanks to the proper hygiene measures and his vigilance and action, saved a large part of the population of Greece from this epidemic’.

A month later, Ioannis Capodistrias congratulated Voulgaris and, in reference to the urban planning of the historical centre of Nafplio, it is recorded that he began to express his desire to memorialise the revolution in public places:

‘I thank you for your correspondence and the fine plan for Nafplio. I approve the names you have given to the various streets and squares and I authorise you to name the remainder using names, as you have already done, in accordance with the principle of honouring the brave men who fell in service of their homeland. Any other criteria would be wrong and harmful…