Andreas Papadopoulos-Vretos was a scholar, doctor, author, personal friend of the Capodistrias brothers and one of the doctors who carried out the autopsy on the first Governor of Greece, Ioannis Capodistrias.

He was born on Ithaka in 1800, but, due to his father’s business obligations, his family needed to travel regularly to the Ionian Islands. He received his first education in Lefkada, his father’s homeland, a place that Andreas himself would later acknowledge as his own native land. At the age of eleven, he left the Ionian Islands and settled with his mother in Naples, where he studied philosophy and medicine.

As a student, he moved in various philological circles and came into close contact with Italian-Albanian diaspora, which lead him to study the Italian-Albanian communities of southern Italy in depth. From 1817, he was under the protection of the Italian philhellene Giuseppe Rosaroll (1775-1823) and agreed to teach his children Greek. His contact with liberal, revolutionary circles led to a strengthening of his own democratic sentiments.

In 1822, he returned with his mother to the British-held Ionian Islands. Having unsuccessfully attempted to establish himself professionally in Lefkada, he decided to move to Ithaka, but there was no potential for the opening of a private school there either. During his time in the Ionian Islands, he had the opportunity to meet the British philhellenes Francis North 1st Baron Guildford and the poet Lord Byron. He finally settled in Corfu, where he took the position of librarian: first director of the library of the Ionian Academy. The death of Lord Guilford in 1827 would have dramatic consequences for the Academy’s library and for the life of Andreas Papadopoulos-Vretos. Lord Guilford’s famous library, which, it is calculated, held around 6,000 volumes, was moved to London at the end of 1830, where it was auctioned off by the legal heir, Guilford’s son, Lord Sheffield. The Ionain State’s inability to buy Guilford’s exceptional collection also resulted in the end of Papadopoulos-Vretos’ tenure. Following his resignation, he decided to seek his fortune in free Greece.

The arrival of Governor Ioannis Capodistrias in Nafplio filled him with hope for a better life. He decided to open a modern and fully equipped pharmacy in the capital of the newly formed Greek state. To organise his business, he travelled to Venice and Trieste, gathered the necessary equipment together with materials and medicines and left to return to Greece. The sudden death of the Governor, apart from grief, filled him with anger for the opponents of his policies. He chose to defend the memory of the tragically lost Ionian by publishing the Greek and French newspaper the Miroir Grec (1832-33) in Nafplio together with Georgios Rallis. It openly supported the Capodistrians, and through editing a series of documents that demonstrated the correctness of Capodistrias’ policy decisions it put together a biography of the Governor.

His devotion to the memory of Capodistrias and his political choices brought him into conflict with the Governor’s political adversaries, who had gained the upper hand, and they ultimately forced him to seek refuge in the hospitable Russia. Through the good offices of Alexandru Sturdza, he managed to find work as a translator in the Ministry of Foreign Affairs of the Russian Empire, in St Petersburg. However, he did not enjoy life in Russia and soon left for Europe.

For two years, Paris would be home to his intellectual and professional persuits. He represented himself to the people of France as an inventor, as he had managed to design a bulletproof vest made of felt. In 1838, he returned to Greece, lived in Athens and was active—together with Georgios, the Governor’s brother and godfather to his son Marinos—in the Philorthodoxy Etaireia [Orthodox Society]. He supported the idea that the ultimate aim of the Greek Revolution was the liberation of Constantinople and the revival of the Byzantine Empire. These activities put him in danger of being imprisoned by the Ottoman state. In 1849, he was appointed to the Greek consulate in Varna (Ottoman Empire). He occupied himself with archaeological excavations and channelled all of his energy into writing a study of the history of Bulgaria. A short while later, he moved to Italy, where he worked periodically for the Greek consulate in Venice, until 1855, when he returned to the Ionian Islands for a while. 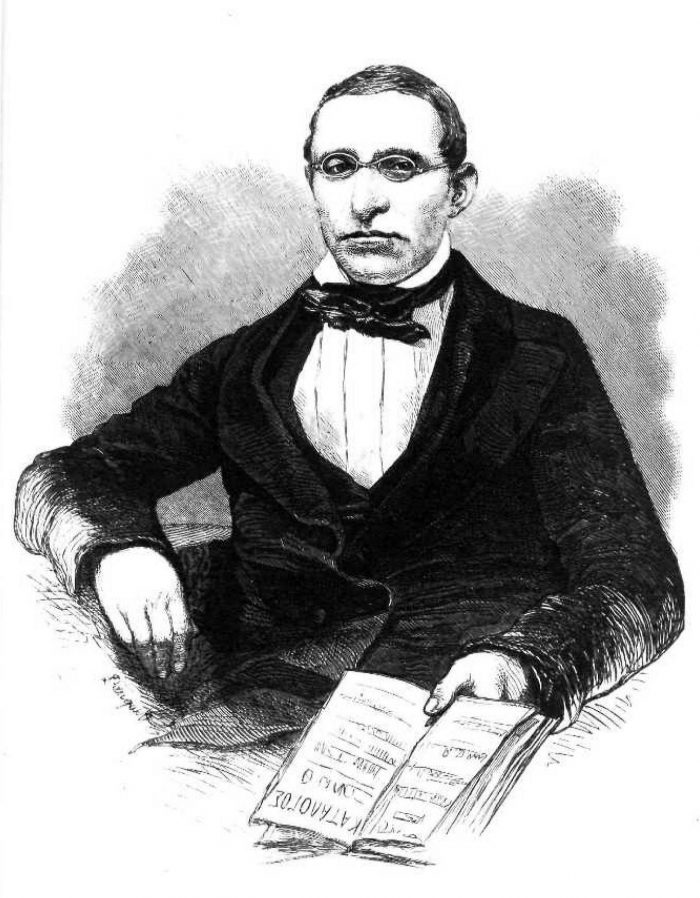 ‘[It is] the power of truth for which I sacrificed everything, with the sole purpose of enlightening my compatriots’

The first Governor of Greece, Ioannis Capodistrias, was murdered in Nafplio outside the church of Aghios Spyridon..

Andreas Papadopoulos-Vretos was at home, still lying in bed, when the woman who looked after his three-year-old son, Marinos, rushed into his room shouting, ‘Sir, they killed the Governor!’ Shaken, he hurried to dress, his mind in a state of confusion. Suddenly, he heard a noise from the room above, in which the Governor’s brother Augustinos Capodistrias was living. He realised that his good friend had just woken up and was , therefore, as yet unaware of the tragic loss that had afflicted his family.

Lost in thought and filled with anxiety, he headed for the home of the Russian consul, to whom he was the personal doctor, to ensure that he was in good health and to discuss with him the future of the country, of himself, and of his family…Meanwhile, Capodistrias’ body had been taken to the Governor’s Mansion. Andreas Papadopoulos-Vretos was among the doctors (Karvelas, Maratos, Traïber) who conducted the autopsy, in the presence of the president of the Senate, Konstantinos Tsamados, and Senator Andreas Metaxas, at, ‘the 7th hour and three quarters before midday’. The Efimerida tis Kyvernisis [Government Newspaper] published the findings of the Medical Committee: ‘Spherical wounds to the back of the head from a firearm’ and ‘wounds to the right groin from a sharp weapon…’

The night had begun to fall when Andreas began his way home. There, yet another calamity awaited him. His wife, Elizabeth Alexandrova Fedrovna, daughter of the Russian general Alexander Fedrov, had given birth to their daughter prematurely while he was away, but the infant had not survived. This was probably the worst day that had ever dawned for Andreas Papadopoulos-Vretos.